CLiFF is Canada’s national labour film festival which takes place in November in locations across Canada. Selected films celebrate workers from around the world and shed light on issues that affect us all.

THE CHOP
17min United Kingdom | English
‘The Chop’ is a comedy about Yossi, a charismatic Kosher butcher who loses his job, cannot find work at other Kosher butchers, and therefore decides to pretend to be Muslim in order to get work at a Halal butchers.
https://vimeo.com/179445944

Huicholes del Tabaco
10min Mexico | Spanish
Most of the tobacco production in Nayarit, Mexico goes to companies like British American Tobacco and Philip Morris international, that despite their billions of dollars in earnings they haven’t taken responsibility for these workers, that even when they work from 20 to 22 hours per day, very often don’t have enough money to buy food for the rest of the week.
https://vimeo.com/185578101

Touch
15min Canada | English
When a single mom, facing eviction, is offered a night’s work, she unsuccessfully seeks a babysitter for her two small children. Desperate, she reaches out to the last person she wants to ask for a favour.
http://www.cbc.ca/news/canada/newfoundland-labrador/newfoundland-film-touch-wins-award-at-cannes-1.3599185

The Devil of Jobs
2min United Kingdom | English
A visit to the Jobcentre takes a dark turn when three job-hunters stumble upon the office of the mysterious Mr.Inferno. They soon discover that are no time differences in hell…

Necessity Has No Law
6min Egypt | Arabic
Day in the life of one of Egypt’s brick factories. Many begin their life in this profession as child workers and end this profession as old men.
https://www.berlinstudentfilmfestival.com/news/necessity-has-no-law-bsff-2017-official-selection

Nobody Dies Here
23.5min France | French
Perma gold mine, Benin. Some dream to find something, others realized there was nothing to be found. Some dig relentlessly hoping to become rich, others died in the process. And a few of them say that here, nobody dies.
https://www.youtube.com/watch?v=5bcxg-hJFVg 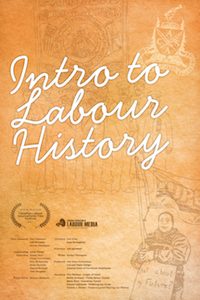 The Alberta Union of Provincial Employees, with partners Jeff Allen Videos and Cut and Paste Design, introduces viewers to Canadian working-class history. The series explores the Canadian labour movement’s roots among immigrant populations and radical politics espoused by the Knights of Labour and the IWW. The series also explores the labour movment’s contributions toward struggles of gender, racial, and colonial justice – and the work still needed.