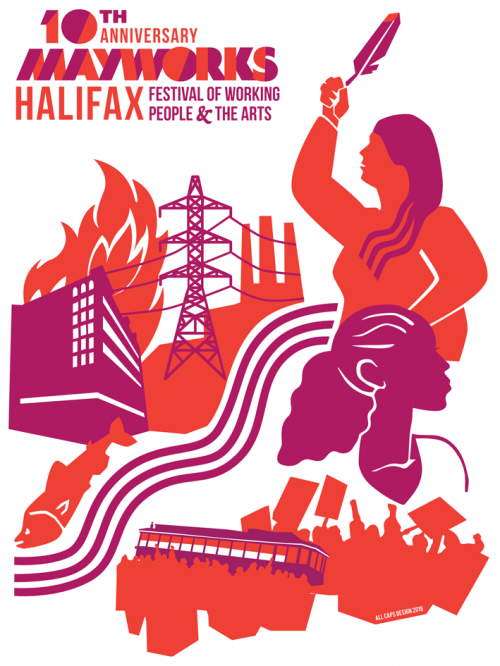 The Mayworks Halifax Festival of Working People & the Arts celebrates its 10th year with a month-long program of events featuring music, theatre, films, graphic novels and a number of interdisciplinary works of performance art.

The decennial festival kicks off with an opening reception immediately following the annual May Day rally and march as it makes its way to Halifax’s north end.

Through Songs of Resilience, Choirs for Change presents a choral arrangement of protest songs and chants collected from a century’s worth of social movements. The Graphic History Collective launches two new additions to their graphic storytelling of Canadian labour history. 2019 also marks the 100th anniversary of the General Winnipeg General strike, which will be commemorated across the country as a seminal moment if Canadian history. To mark this overlapping anniversary, Mayworks presents a reading of Thomas McKechnie’s Remembering the Winnipeg General staged in Halifax by DaPoPo Theatre.

Setting up at the Glitter Bean Cafe for a durational performance piece, artist Colleen MacIsaac will incite reflection on the creeping sea level rise resulting from climate change. Textile artists Xiaocheng Li and Leesa Hamilton make use of fabric waste to construct artisanal ropes with the use of a rope making machine.

For the first time, Mayworks Halifax partners with both the Animation Festival of Halifax (AFX) and OBEY Convention to co-present a number of events ranging from a panel discussion on the working conditions of independent animators to a free outdoor concert featuring Montreal trio Strange Froots.

The Bus Stop Theatre is again a primary host of the festival hosting eight separate events. These include a panel discussion on Black Feminism, a short film program, and a new original play conceived by Alex McLean (of Zuppa Theatre fame) which features Kat McCormack, Briony Merritt and Richie Wilcox. Shows at the Bus Stop also include a new presentation by the Beehive Design Collective and an interdisciplinary project created by the Mi’kma’ki 2030 Collective.

The festival closes off with a pair of musical events featuring community rap cyphers and music sets spun by five different DJs throughout an overnight dance party lasting till the new dawn.

Festival Passes on Sale NOW for Only $40

On sale throughout the festival!

A new festival, a new series of collectible cards. Keep your eyes pealed for merchandise tables at festival events.